It’s All In The Name

So why one has to wonder does Southend Council think ‘Cultural Centre’ is a good one?  Let’s face it how many children or teenagers or even any visitor is going to get excited about visiting a ‘cultural centre’? indeed even our die hard locals are sceptical!

Would you hold your wedding or celebrate an important birthday in a ‘cultural centre’? Well I suppose a few might but surely ‘Pier Pavilion’ is better, especially if Southend is allowed to add Royal or Jubilee to it- The Royal Pier Pavilion or The Jubilee Pier Pavilion are both a little more exciting and in no way deter from the place being used for ‘cultural’ activities and there are a number of other possibilities along this theme – Southend Royal Pier Pavilion etc. It was put up in 2012 the Jubilee year after all and since we lost out as a city could we not please have a Royal Pier to reflect the Pier’s royal heritage or even a Royal to officially open it.

There are many uses that The Pier Pavilion could be used for- cultural events certainly, but also exhibitions, parties, weddings, fund raising events, mini conferences, artists at work days, lectures, school room etc and I firmly believe that labeling it as a ‘cultural centre’ will deter more than it will attract. So come on let’s get it changed before it’s too late, let’s put some sparkle into the end of our pier after all it is supposed to be fun!

These are my views and are not the views of the Southend Conservative Group or Associations.

The Pier Pavilion is on its way!

Tomorrow will be a landmark day for Southend. At long last the new building has been hoisted on to a barge that will slowly bring it from the docks in Tilbury where it has been assembled to the Pier. It should be lifted on the Pier some time tomorrow. 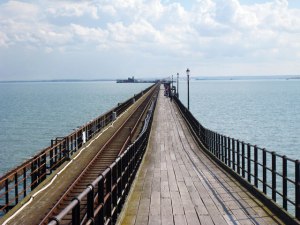 Southend Pier is ready to be fully opened in Time for the Easter Break!
The repairs following the boat collision are now complete and the Pier will re-open

Don’t forget that shortly the new Pier Pavilion will be lifted onto the decking so now is a good time to take a stroll down the Pier (or even the train) to see where it will go.

According to the Sunday Times the Arts Council has aquired a £60m arts stash. Leaving aside the whys and wherefores of their collecting all of this, lets just start to put the situation right. They have started to put the art on line (at a cost of £45k) and they say the art is available on loan. Now Southend has long wanted to improve its cultural offering and has in the past gone to the

Arts Quango for funding but with relatively limited success. I don’t really care if Southend owns the art or has it on loan, indeed on loan might be better as every so often it could be changed. I can think of several places for a Sculpture or two and I am sure the Beecroft would like a rotation of art pieces. This would encourage more visitors to the town, give residents the opportunity to view special pieces that  have been bought through the tax payer and which currently are not too easy to view.

Southend Council officers have sent for details! But say insurance may be a problem- Why?  Hundreds of towns have works of art on display, it’s a question of getting some insurance…….

Southend Pier gets the green light

The Pier and Foreshore Working Party today agreed to move forward with plans for the Pier Head.

Based around the award winning scheme the work will be phased and funded by Southend Council. The Conservative lead Council has put £3m, into the capital budget to move the Pier forward. Following the fire the decking has been repaired, the station rebuilt, fire precautions installed and much more as well. Currently the windbreaks are being extended and ongoing repairs are funded.

The new scheme will see the structure strengthened and extended for a new pavillion that will be multi use from Conferences to cultural performances from weddings to childrens parties from classrooms to artist studios officers will now look at how best to use the space which will also include a restuarant and or a cafe. The award winning schemedesigners  have already, as part of the bid submission, done a lot of work and their proposals are feasible to be built, hence the decision to work with the winners.

Chairman John Lamb said it was really important to move the Pier on hence the £3m budget which the Conservative Cabinet had provided as an initial sum.

Cllr Anna Waite said we want something for everyone at the end of the Pier, this will provide a great covered space that can be used for all sorts of things, once this is underway we can look to the next phase so that little by little over the next few years we can provide the town with a Pier to be proud of.

PIER DESIGN GETS THE THUMBS UP

Posted on October 17, 2009 | Comments Off on PIER DESIGN GETS THE THUMBS UP

Following a scrutiny meeting to which all councillors were invited to comment and make suggestions the Pier Competition Design winners,  White with Price and Myers, were approved as the preferred partners to take forward their designs. The Council must now await the outcome of their Sea Change bid to Government before arranging the necesary meetings to get this underway.

Comments Off on PIER DESIGN GETS THE THUMBS UP

Southend Cabinet has endorsed White with Price and Myers as both the winners of the competition and as the preferred partnership to work with the Council to develop the plans for the pier. There were 5 finalists but this was considered to offer the best design principles, the best or most realistic approach to the needs of the Pier as a family desination that reflects a maritime and cultural theme and it was also felt that it respected the existing Pier and  that  White with price and Myers were a team that would work well with the Council to develop a final design and deliver it within budget. The full council will have an opportunity for debate and input on Thursday 15th Oct. Southend Council hopes that  Government funding will be confirmed shortly so that it can proceed.